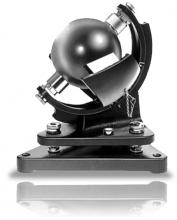 The sunshine recorder, Campbell-Stokes pattern, serves for the self-acting recording of the duration of sunshine. The instrument essentially consists of a glass sphere acting as burning lens as well as of a metal bowl arranged in focal length concentrically to the sphere. The glass sphere has a diameter of approx. 96 mm, a determined refractive index, is made of non-streaky glass and cut accurate to gauge. Every day a new cardboard strip provided with hourly division is put into the grooves arranged at the inner side of the bowl. The sun burns more or less intensive traces on the cards according to its apparent course and owing to the intensity of the radiation. After having removed the recording card from the bowl, it is possible to ascertain retrospectively at what time and how long there has been sunshine.

Due to the suitable dimensioned bowl the incidence of the sun's rays is obstructed as less as possible, even in case of a low position of the sun. Glass sphere and bowl are fixed to a semicircular arc and after having loosened the two attachment screws they can be turned together with the frame guided in one slot of the base plate around a horizontal axle running from east to south through the centre of the bowl. Thus the bowl can be adjusted to the inclination corresponding to the mean altitude of the sun respectively to the latitude of the place of observation. The sun' s altitude changing in the course of the

year and thus causing a slight daily altitude displacement of the burning trace is, however, taken into consideration by using by turns three different types of cardboard strips as well as three pairs of the bowl' s grooves running parallel to each other. The short curved cards are put in winter into the superior pair of grooves, the long curved strips are used in summer in the lower pair of grooves whereas the straight cards are employed in the mean pair of grooves during the transition seasons (spring and autumn). The longitudinal deviation of the cards depends on the variable maximum duration of sunshine during the different seasons. For this reason the longitudinal difference between the single cards is smaller for equatorial zones than that for temperate zones. 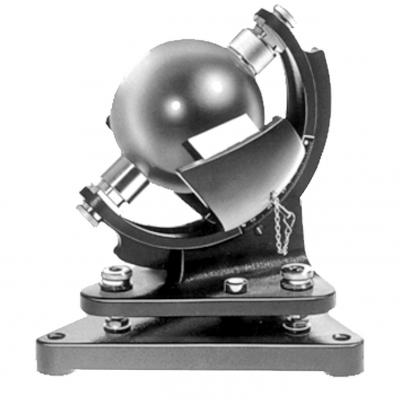